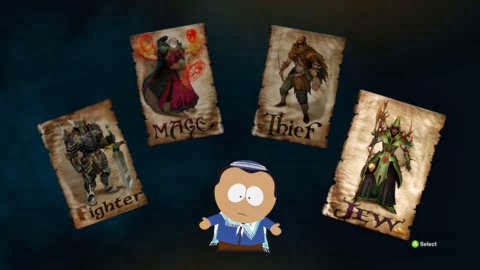 South Park is a show that is funny, yet offensive to a lot of television viewers.  I am one of those viewers who find some parts to be very funny, but can be easily turned off from it due to its nature to make jokes at various terms that can be seen as offensive and sometimes even threatening gestures.


Although I found the show a bit off putting at times, I do sometimes get past it to find other meanings behind the show.  When I heard about this new game called South Park: The Stick of Truth, I was very skeptical.  I possibly won't even buy this game until everyone else has had a chance to play with the first couple of levels.  This might be a good game to rent in the alternative to buying it which is where I am leaning towards.


And when I heard about the article from GameSpot's website, "Embracing The Crude In South Park: The Stick Of Truth", I thought, "Embrace it? I don't even know if I can stomach the crudeness in South Park."  But I don't know, maybe it is just me.  A lot of other people seem to really love South Park and there are a couple of episodes that I have been able to see to the ending.

In the article, Mark Walton (that's the guy who wrote the article), stated that the game uses classic RPG actions throughout the game.  He also states that there are a lot of side missions to do where you explore your surroundings, complete quests, and a couple of other activities.  So this is like a normal "World of Warcraft" game with a big twist to it.

Basically he goes on to say that this is a game that could offend you in multiple ways based on your religion, your nationality, your tolerance to high amounts of cursing, and many other offensive materials.  But my fear about this type of game is that if people actually play this game, will they overlook the offensive materials or will they use these materials in real life situations?  I mean we already live in a world with these events happening now; do we really need more of this?

So is this a game that is going to be worth something down the line, or will it spike a huge controversy to others who are incredibly offended easily?  What does everyone else think?

BloggerRay
Blogging about the things I love is something that makes me feel good about my interests. The items that I blog about are either about what has happened among the public, or events that I have personally experienced. Whichever the reason, my blogs are always worth looking through.

Get Updates by Email